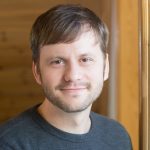 -by Dr Stuart J. Brown
When I first suggested the keloid research project at RAFT, I also made the mistake of telling my brother-in-law, an A&E consultant, about my plans.
“Keloids? Why would you want to bother with keloids?” was his (slightly disheartening) response.
In fairness, A&E consultants don’t see many keloid sufferers. Keloids are pathological scars which keep growing and giving symptoms like pain or itching. Although in extreme cases they can grow very large indeed, in many cases you might not even realise people have them.

That’s not to say they aren’t a problem – they can be a serious one. Having one reduces your quality of life, sometimes very severely, especially when they affect a visible area (which is quite often). But I think his point was, they aren’t fatal. So why try to develop something for keloids instead of researching a treatment for a life-threatening disease, like cancer?
I guess the first answer would be that research into life-threatening diseases isn’t exactly underfunded or over-looked. There are huge teams of researchers using the most sophisticated and expensive equipment to develop new cancer, stroke or heart disease therapies. So the first part of the reason why we want to study keloids, is that RAFT – with its resources and expertise – can make significant contributions to keloid treatment. In a field such as cancer research, we might struggle to come up with more impactful research projects than, for example, a building full of cancer specialists and researchers.
Keloid research just isn’t prioritised in the UK. If you analyse the last 5 years of scientific publishing, you find both types of pathological scarring – Hypertrophic and Keloid – don’t feature in very many papers compared to other skin diseases, even harmless ones. You might be surprised at how little research is published about keloids- I certainly was. More papers are published devoted to verrucae, benign warts of the sole of the foot, than keloids. 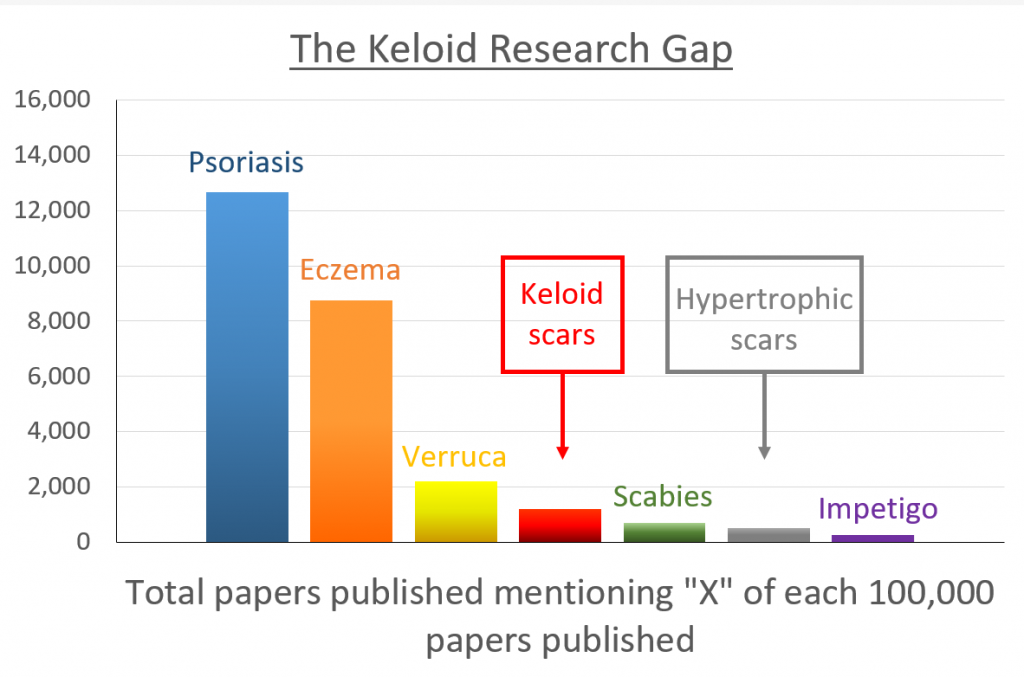 I don’t definitively know why this, but I could take an educated guess. Keloids are a sort of “perfect storm” of things which put off scientists and researchers. Firstly, the disease is very complex, involving a fibrotic process driven by at least 3 major types of cells, so it is hard to think of ways to meaningfully treat it. Compare it to the verruca example above – verrucae are formed when a little virus gets through the skin barrier and causes your cells to grow too much, which forms the verruca wart. Much simpler.
And also think of the profit motive. A lot of science is driven by pharmaceutical company spend. A pharma company would love to develop a targeted verruca treatment, like an antiviral cream. Most current treatments are noxious chemicals which take a week to burn off the wart. Imagine how many people would buy a little cream that you apply once and hey presto! – the verruca is gone! And then, next month, they get another verruca at the swimming pool and have to buy a fresh tube…
Keloids are notoriously recalcitrant and very varied, so it’s difficult to imagine how some hypothetical wonder treatment would work, and realistically how it could be effective. Many of the treatments we already use can improve the keloid by flattening it, or help with symptoms, but they can’t cure it or remove it completely. Some treatments don’t do anything for some patients. Some, like simple surgical removal on its own, have been largely abandoned because they often make things worse – the keloid returns, and comes back bigger. 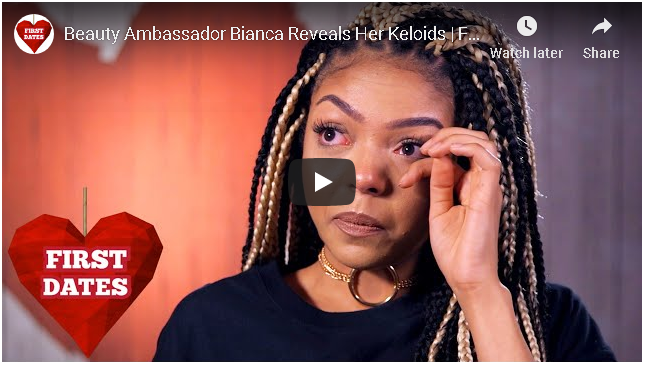 In a curious way, psychology also plays a part. Because they mostly arise as a complication after surgical treatment, Keloids and Hypertrophic scars almost aren’t viewed as a disease in their own right – they’re that thing that happens to your patient after, say, their heart surgery or C-section. A lot of research interest is driven by perceptions of how big a problem is, how widespread it is – and patients tend to suffer in silence. It’s very rare to hear people openly discussing their keloids and the issues they’ve caused, in the way that Bianca Lawrence does in the video here (right).
So with all of that in mind – why in the end go ahead with a keloid project?

In my next blog I’ll talk about how the Keloid Project relies on RAFT’s past, and our plans for it in the future.

If you’d like to support the Keloid Project, you can donate via the Donate button.