RAFT is a medical research charity founded in 1988 by four plastic surgeons; Roy Sanders, Brian Morgan, Douglas Harrison and Paul Smith, who were dismayed at the lack of successful wound healing treatment options available to patients who had suffered severe burns, such as those injured in oil rig or domestic fires. They were joined by Professor John Scales, the first director of research and Sir Robin Chichester-Clark, the first chairman of the charity.

Such is today’s celebrity culture that when most people think of a plastic surgeon they imagine a doctor who nips, lifts and tucks the rich and famous to keep them looking young and beautiful. But while many plastic surgeons do go on to work in the field of aesthetic surgery, many more are at the sharp end of medical reconstruction – they are specialist consultants who are brought in to help restore, rebuild and remodel the human body after illness, accident or because of birth abnormalities. Essentially, they are the people who help life to go on as normally as possible for patients who have undergone severe physical trauma.

So it makes sense that it was plastic surgeons who founded our medical research charity, the Restoration of Appearance and Function Trust or RAFT for short.

Inspiration to Innovation – how a hovercraft changed burns treatment globally

The path which ultimately led to RAFT began when Mount Vernon Hospital in Northwood, England, became a plastic surgery and jaw injury centre in 1953.

At this time, many burns patients died from sepsis (whole body inflammation) caused by infection. Standard hospital treatment was to leave the burn exposed to open air to dry the injury. However, when extensive burns covered most or all of the patients’ body, the part of the wound touching the bedding remained wet.

Clinicians at Mount Vernon pioneered raising the temperature of the room to create a ‘mini-desert’ to prevent heat loss, a common problem amongst burns patients, and to speed up the drying of the wound; but that didn’t help where the wound touched the bedding. And that’s where Professor John Scales came in. A biomedical engineer, he took inspiration from a hovercraft and developed the first prototype bed that would allow a patient to ‘float’ on air. Of course such an innovation wouldn’t just benefit burns patients but also those with other injuries or those at risk of developing pressure sores.

Funding from the Medical Research Council was obtained to facilitate further development of the air bed and to conduct clinical trials at Mount Vernon Hospital. Professor Sanders, one of RAFT’s founders, was part of Professor Scales’ research team which also included Les Hopkins; a hovercraft design engineer.

This pioneering work at Mount Vernon hospital not only led to the development of air mattress technology which is now used to help patients globally- it was the beginnings of a Research Institute at Mount Vernon which later became known as RAFT. 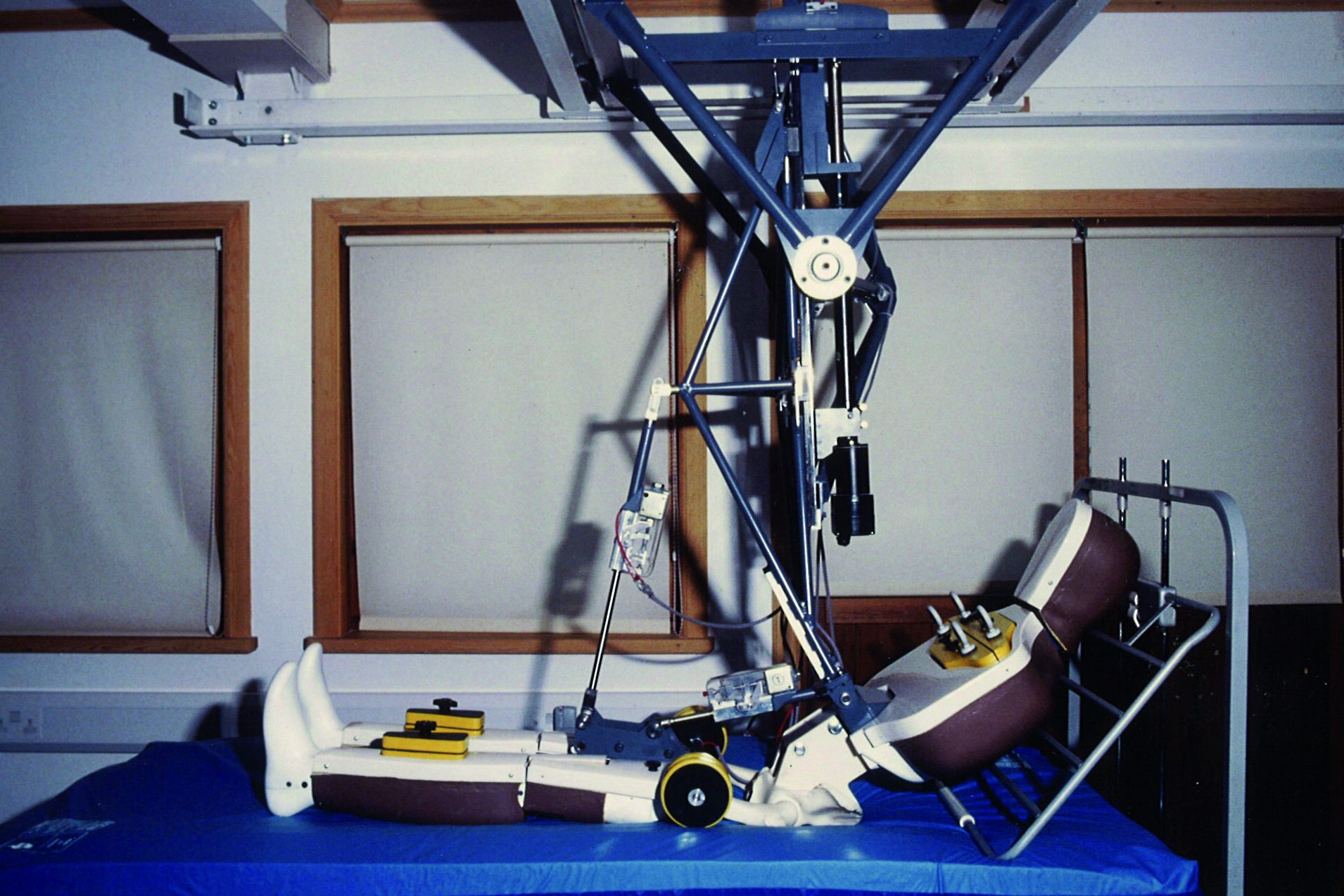 From the start, RAFT has always embraced new technology.

Professor Scales’ work on patient support systems continued during his tenure at RAFT as Director of Research. He recognised that no method existed for testing how well mattresses distributed patient pressure. Even distribution of such pressure is crucial to minimise the risk of pressure sores developing in patients, so Professor Scales devised the idea of a creating a dummy patient for mattress testing.

It was estimated that up to 70% of pressure sores developed on the bottom, so having the right shape on that part of the dummy was crucial. After initially trying to plaster cast people’s buttocks, the research team at RAFT turned to new technology; laser scanning, to create an accurate mould. ‘Gladys’ (pictured, left), as the dummy patient became known, was later born and the rest as they say is history!

Today that pioneering spirit remains strong. RAFT is quick to examine how emerging technology could be utilised to develop new surgical techniques. A prime example is our new research project into facial reconstruction which is looking at how 3D printing can be combined with new biological compounds to create a scaffold around which to grow new bone.

From laboratory bench to patient bed

Over the last 29 years the RAFT research team has been focusing on areas of research that can provide practical and tangible solutions for children and adults who have had their lives and health altered dramatically by accidents, disease or birth defects.

For that reason, our emphasis has always been on research that will provide a solution to a medical problem within two to five years.

More on the work that RAFT has done to change front line healthcare can be found here: Our Impact