In 2018, the medical research charity, RAFT, will celebrate 30 years of creating new products and ways to, in some cases save and in others improve, the quality of life for people who have suffered severe injuries. One of the ways it is choosing to commemorate this important milestone is by preparing itself for the next 30 years.

As part of this process, today RAFT is announcing that its Chairman, Francis Gugen, will step down at the end of 2017 and RAFT will shortly be starting a formal process to recruit his successor.

Francis Gugen commented: “In May 2017, I will have been Chairman of RAFT for seven years, a Trustee for the last decade and a supporter for over twenty years. I am still as passionate about the work that RAFT does and its ability to change lives as I was when I first became involved and I will continue to be a supporter. But, as a firm believer in innovation, I want to give others the chance to bring fresh ideas and thinking to RAFT to set the Charity on a successful path for the next 30 years.”

A strong advocate of board diversity, Francis also wants to use this opportunity to improve the diversity of RAFT’s board of Trustees. He further commented: “In my professional life I have sought to promote diversity wherever possible. At RAFT we have a diverse executive and staff team. I am particularly proud that, not only do we have a female CEO, but that more than 50% of our scientific team are women. At a time when the number of women in science has dropped to 41% of the scientific workforce, I am delighted that we employ so many women in senior scientific posts. I now want to bring that same level of diversity to the board and we are appointing a professional recruitment agency to run the process in a way that will attract candidates from all backgrounds.”

Leonor Stjepic, RAFT’s CEO, commented: “Francis has been one the best Chairmen I have ever worked with and he will be a sad loss to RAFT. However, I am delighted that his connection to RAFT will continue as the new Chairman of Smart Matrix Ltd (“SML”) – the company that RAFT set up to commercialise one of its inventions and thereby take it to patients. With Francis as the new Chair, I am confident that SML will be a success. The setting up of SML Ltd is not only the model for RAFT’s future income generation, moving from a dependency on only philanthropy to social investment, but it is also being viewed as a future model by some other charities. SML would not be in existence if Francis had not given it his visionary leadership and many hours of expert advice.”

Given Francis’ history of creating and growing innovative organisations, RAFT has decided to honour his tenure as Chairman by the creation of a special prize.

Leonor Stjepic explained “To commemorate Francis’ long standing contribution to RAFT’s success, we are creating the ‘Francis Gugen Innovation Prize’. The prize will be given to the person who comes up with the most innovative idea to further the Charity’s aims. This could be science or a new way of delivering our research. Many of our supporters have wanted to show their appreciation of Francis’ contribution by donating to the Prize and the donations will be used to fund a one year study to deliver the idea or determine how best to take it forward. We believe there is no better testament to Francis’ time as Chairman than a prize to celebrate innovation.” 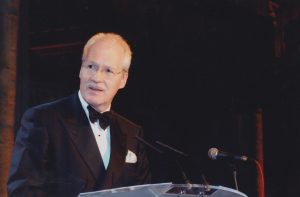 In addition to his roles at Raft and SML, Francis Gugen has had an over 40 year career in the energy industry and has been involved in setting up and chairing companies and bodies where innovation has been at the forefront of what they do, including: