Innovative and award-winning medical research charity RAFT today announces the appointment of its new Chairman: Dr Niccolo Caderni who will take over the role from Francis Gugen.
An astrophysicist by training, Niccolo graduated from the University of Florence, his native city and came to the UK as a European Space Agency Fellow at the University of Cambridge. He has held a number of research and academic positions before a change of career in the mid 1980’s to the world of finance, technological innovation and fine art.
Niccolo has been a Vice- President, Mergers and Acquisitions at Bankers Trust International, Managing Director at Phillips, the third largest auction house in the world, and the Chairman of Webiz, the private Equity fund of the Italian utility giant, ENEL. He has served on the Board of the Centre for European Policy Studies in Brussels, and he is currently Chairman of ETT, a company that creates multi-media interpretations for Museums.
RAFT CEO Leonor Stjepic said: “I am delighted that Niccolo has been appointed as the next Chairman of RAFT. As well as his impressive personal qualities, Niccolo brings to the job a wealth of relevant experience in the fields of technology transfer. I’d also like to thank Francis Gugen for his consistently strong and professional leadership as Chairman of RAFT since 2010.”
Niccolo Caderni said: “It is an immense honour to be asked to be the Chairman of RAFT, an organisation which is so central in medical research, and whose work has touched the lives of so many people. I have great respect for the integrity, commitment, and professionalism of the charity’s staff and for what they have achieved under the outstanding leadership of Francis Gugen. Together with this amazing team, we are all looking forward to meeting the challenges of the coming years.”
After seven years as the Chairman for RAFT, Francis Gugen will be retiring from the post to take up a new role as Executive Chairman of Smart Matrix Ltd (a for-profit company spun out of RAFT to take one of its products to patients) on 2 October 2017. 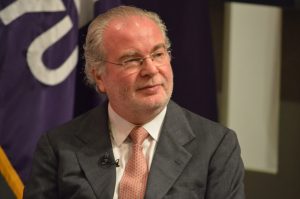