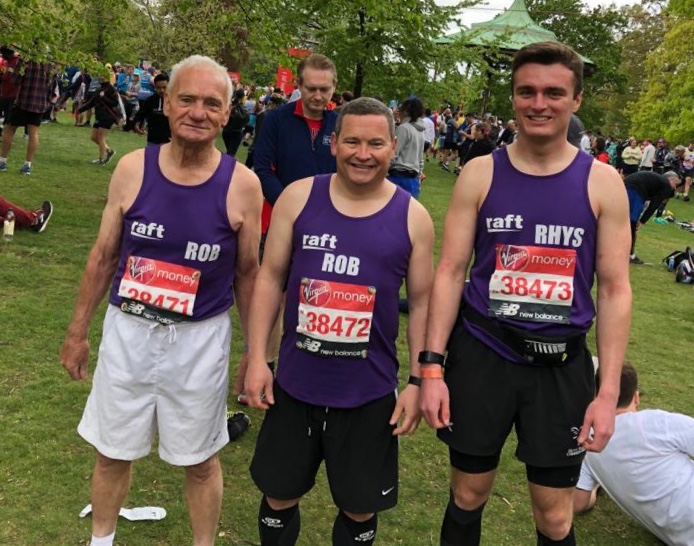 We are really proud of our Marathon runners, Bob Jenkins (far left), and his son Rob (middle). In recognition of his 23 Marathons for RAFT that they have been chosen by incoming marathon sponsors, Flora, as a beneficiary of their initiative to help charities keep running. RAFT gets to receive £1,000 from this.

Rob said: I have run the London Marathon with my 83 year old dad, Bob, since 1993 for RAFT. This was my 22nd and his 23rd and final race as he’s now hung up his marathon shoes for good (he’s been saying ‘last one’ and ‘never again’ for about 5 years!!). We ran in his local area, the weather wasn’t kind but passing motorists and pedestrians were, it was lovely to have a unique way to ‘end an era’.  Between us we have raised around £6,000 this year, on top of the c. £80,000 we have raised since we started running for RAFT.

We only started running for them as they had spare places, then saw the work they did and thought ‘if you’re going to put yourself through this much pain it should be for a good cause’ and this one is!  Although my dad will no longer be running the marathon, he’ll still be doing half marathons to fundraise and will still be involved in the charity as he was made a patron a few years ago in recognition of his efforts.

All in all, this year’s marathon was not the way we expected him to finish his marathon ‘career’ but in some ways it was nicer to do it this way.

I think Bob has said every year for the last five years that will be his last marathon. We shall see. And no mean feat from ‘young’ Rob, with 22 marathons under his belt.  It is support such as this that helps keep going and doing the amazing science we do. Thank you to the Jenkins family from all at RAFT.