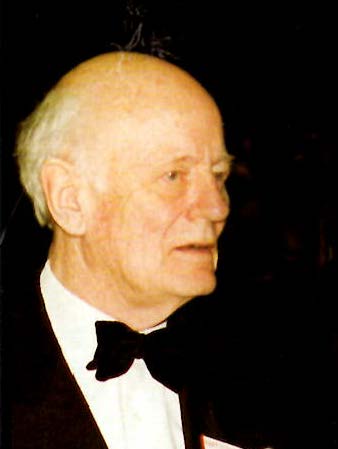 I was the Deputy to Robin for most of his 12 years and must say it was a really rewarding experience – the essential element being Robin’s leadership.
Robin had the quality of being able to lead mainly through his ability to encourage one to do one’s best in the interests of RAFT. We were a team and he the clear leader, but he was always more than ready to have discussion about the best way to proceed. The original set-up, when I came on board, was three Trustees (Robin, David Pollock and myself) and our operations centre was two rather cramped little offices in Mount Vernon Hospital. We met from time to time in a variety of locations and sometimes in hospital itself! David was the PR man having a depth of experience in this field and I undertook the finance role keeping in touch with our accountant at the office.
Robin’s contacts with the great and good were of course invaluable to the cause and eventually enabled us to build our fine modern building (Leopold Muller Building) in the grounds of Mount Vernon Hospital.
The new building heralded a great leap forward for RAFT in all aspects. A series of high level money raising events took place including:

The new building was excellent for inviting groups of people down to attend talks followed by a buffet style lunch. A number of small talks were also held at various venues in London although the slides included some rather upsetting photos showing ‘before’ and ‘after’ examples of pioneering plastic surgery – definitely not for the faint hearted!!
Over time there were big advances on all fronts and a significant increase in the number of Trustees, which of course opened new revenues for fundraising.
Peter Forbes F.C.A., former Deputy Chair of RAFT