We were very sad to hear of the passing of RAFT’s first Chairman, Sir Robin Chichester-Clark. It was thanks to his wise leadership during RAFT’s first 12 years that set the foundation for RAFT’s success over the last 28 years.

Sir Robin’s career started in politics. A former Ulster Unionist MP for Londonderry he entered Parliament in 1955 and served as a Minister of State under Edward Heath. A political moderate, he represented Londonderry at Westminster for 19 years before leaving politics in 1974.
After hearing about the work of RAFT’s four founders, Sir Robin became one of the first people to support RAFT. He took the role of chair in 1988 and was instrumental in helping it gain charitable status and establishing its research programmes.


As chair, Sir Robin established the values and pace of research that continues to this day, as well as ensuring that the necessary infrastructure was in place to administer and govern RAFT. For example, in 1992, Sir Robin oversaw the appointment of the first board of trustees allowing the founding consultant plastic surgeons to hand over the reins to the new board.
Under his stewardship, RAFT was greatly honoured when HRH The Duchess of Kent consented to be Chief Patron. Sir Robin then welcomed HRH to RAFT when she officially opened its permanent home at the Leopold Muller Building at Mount Vernon Hospital in 1993.


Sir Robin retired as chair in 2000. His legacy at RAFT includes the foundation of the RAFT Institute of Plastic Surgery and establishing a research programme that has developed a wealth of scientific innovations that have gone on to change healthcare practices the world over. These included the development of the first therapeutic air bed to prevent pressure sores that is used in virtually every hospital and surgical techniques and nerve studies that have helped patients with Facial Palsy (paralysis) to smile again.
During the period of 1988 – 2000, Sir Robin’s chairmanship, RAFT scientists received 32 awards in recognition of their pioneering work.

Francis Gugen, RAFT’s current chairman said: “It is with deep sadness that we learned of the death of our first chairman, Sir Robin Chichester-Clark. It would be fair to say that while our founders had the vision to set up RAFT, it was Sir Robin who was the driving force behind establishing it as a charity and give focus to its research programmes.
“By taking over the running of the charity he allowed its founders to turn their vision into a reality. He inspired a great many of our scientists, surgeons, trustees and staff and will be greatly missed.” 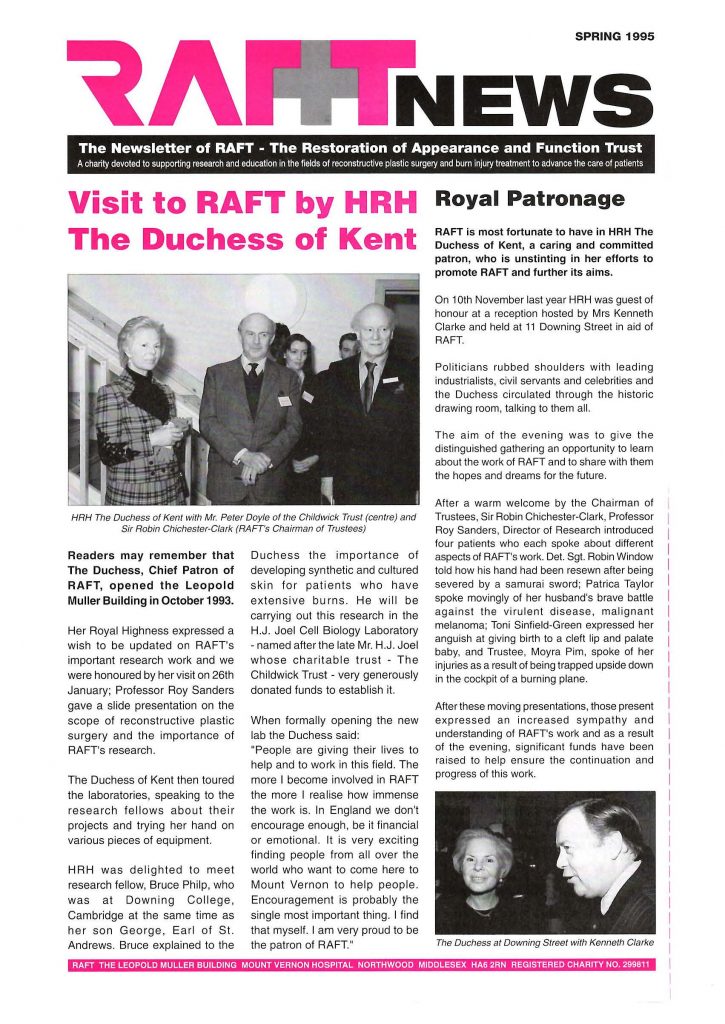 On hearing of Sir Robin’s death, The Right Honourable Earl Howe, Minister of State and Deputy Leader of the House of Lords and a former chair of RAFT said: “Robin did a huge amount for RAFT in its earliest days and we owe him a big debt of gratitude.”
Former trustee Marcus Agius added: “Robin’s political background always stood him in good stead whenever he spoke – his timing, delivery, cadence and made it impossible for people not to concentrate on what he was saying. This always ensured that his message of the day was received loud and clear!”
Sir Robin Chichester-Clark, who was born on 10 January 1928 and died 5 August 2016. Our thoughts are with his family.