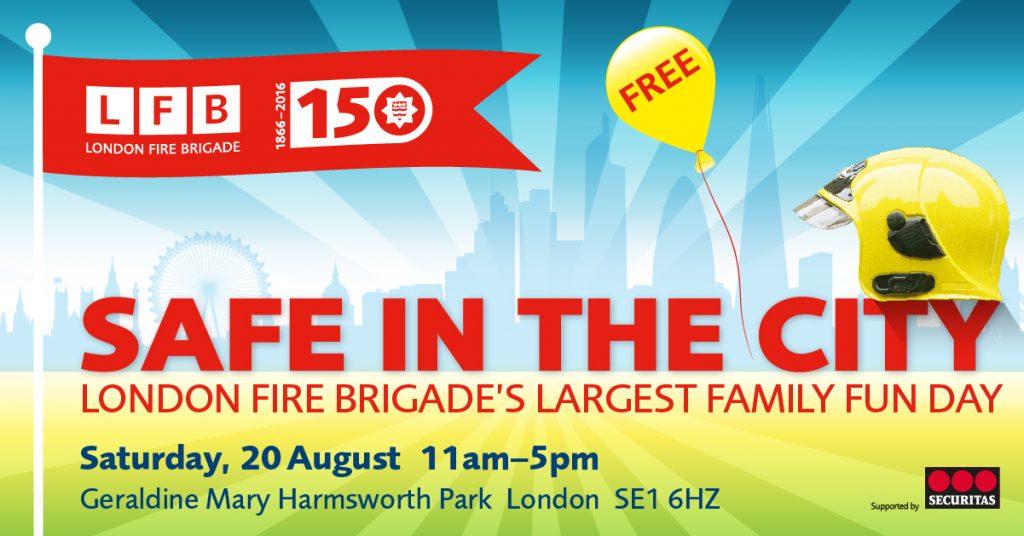 The RAFT team will be taking a stand at the London Fire Brigade’s largest ever family fun day which forms part of the force’s 150th anniversary celebrations.
Safe in the City, which is sponsored by Securitas, is taking place on Saturday August 20th (11am to 5pm) at Geraldine Mary Harmsworth Park (next to Imperial War Museum), London, SE1 6HZ. This action-packed free event will give people the chance to see fire fighters in action as they undertake live rescues, demonstrate fire dog handling, use the fire engines, and much, much more.
As one of the five charities chosen by the Commissioner of London Fire Brigade, Ron Dobson CBE, QFSM, to be supported during the anniversary year, RAFT has been invited to taking a stand at the event. This will give people the opportunity to meet the RAFT team and find out more about the charity’s pioneering work in the fields of wound healing for burns patients, breast reconstruction, bionic limbs, 3D facial reconstruction and bone regeneration.
Speaking about the event, Leonor Stjepic, RAFT CEO said: “London Fire Brigade’s Safe in the City event promises to be a fun day out for the whole family. It will give people the opportunity to see how London’s firefighters keep our City and its people safe, whether they are trapped in a burning building or have been involved in a car crash.
“We are delighted to have been invited to take a stand at this event as one of London Fire Brigade’s chosen charities. It is always a pleasure to meet the public and have the opportunity to explain the work our scientists do first hand.
“It is a sad fact, that many of those rescued by the fire brigade suffer severe burns and face a long road to recovery. That is where RAFT comes in – we have been developing new treatments for 28 years. Most recently, our scientists have developed Smart Matrix® which looks set to revolutionise burn treatment by speeding up wound healing and reducing scarring. It is now set to enter the second phase of clinical trials required to bring this to the market and change the lives of millions world wide.
The Safe in the City event will include demonstrations from specialist staff on extrication and trauma, line rescues, 999 call handling and urban search and rescue – the practice of digging people out of very difficult places. Interactive performances will take place in the Community Safety Zone, where visitors can learn about fire safety in the home. London Fire Brigade’s museum team will also be showcasing a range of fire fighting equipment, from steam-powered and vintage appliances to the Brigade’s brand new fire engine for 2016.
To find out more about Safe in the City visit www.lfb150.co.uk.
For further information about RAFT, its research or to make a donation visit www.raft.ac.uk.