Dr Stuart Brown, one of RAFT’s Postdoctoral research scientists, featured as a guest during the most recent episode of ‘The Naked Scientists’, which was broadcast live on BBC Radio Cambridgeshire on Sunday 22nd October 2017. Dr Brown was interviewed on the subject of wound healing and Smart Matrix®; an advanced wound care product developed by RAFT. The potential future use of Smart Matrix® for the treatment of acid attacks victims was one of the areas discussed with Dr Brown during show, which will be broadcast on BBC Radio 5 on Sunday morning (29th October 2017).
The show is now available via a podcast. To listen to the interview with Dr Brown, click here. The podcast for the entire show can be found here.
The award winning show was one of the first podcasts to exist and is now one of the world’s most popular science shows, achieving over 50 million programme downloads in the last 5 years.
More information on Smart Matrix® can be found here. 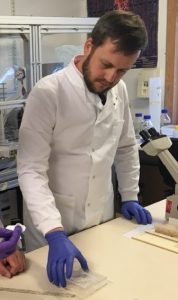