Saturdays (11th November 2017) edition of The Times newspaper included an article about a surgical procedure which has been used to provide a patient with a mind controlled bionic arm. The article contained a quote from Mr Norbert Kang, a RAFT trustee and former surgical research fellow, as one of his patients benefited from the pioneering surgery which has given increased functionality to her right arm via a prosthetic hand. The surgeries were performed by Mr Oskar Aszmann of the Medical University of Vienna, who has carried out 13 such reconstructions on patients who have lost the use of a hand through traumatic injury to the brachial plexus; a network of nerves in the shoulder, neck and chest.
Mr Kang is currently working with RAFT on its Bionic Limb project, the goal of which is make upper arm prosthetics completely intuitive. RAFT is undertaking research which will result in a bionic prosthesis that can be worn without discomfort and operated intuitively, as if it were the patient’s own hand and arm. 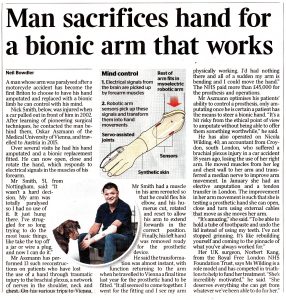